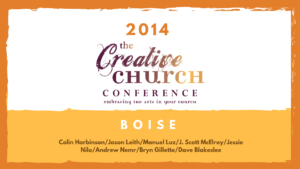 All conference videos are now $5 each!

(C49) “Art is Love” “Future of Arts in the Church” “Removing the Walls Between Artists”–J.Scott McElroy & Jessie Nilo—(Two-Part Session)

In this session Jessie Nilo opens the conference, followed by Scott’s message (beginning at 07:30) of “Art is Love” and “The Past, Present, and Future of the Arts in the Church” . Then Jessie Nilo presents (beginning at 32:00) her passion for “Removing the Walls Between Artists”.

In this powerful message, Dr. Colin Harbinson, a pioneer of the of the faith+arts movement, shares his thoughts on dealing with creative disappointment. (message begins at 02:00)

Dr. Colin Harbinson has been involved in many aspects of the arts, missions and education for 40 years. Colin created the internationally acclaimed production Toymaker & Son that has been performed in over 70 countries.

Recognized internationally as a pioneer and leader in his field, Colin’s work as a writer, director and producer has won numerous industry awards, including the prestigious Golden Halo Award from the Southern California Motion Picture Council.

Dr. Harbinson chaired the Redeeming the Arts Issue group for the 2004 Lausanne Movement Forum in Thailand, and was appointed Senior Associate for the arts. He is the former editor of the Creative Spirit, a journal on the arts and faith, and until recently was Dean of the Arts at Belhaven College in Jackson, Mississippi. (2014 Boise Conf. Main Session)

(C50) “Performance: An Improv Collaboration in Tap and Jazz”–Andrew Nemr and Manuel Luz

In a special creative session, renowned tap dance and TED fellow, Andrew Nemr collaborates in with jazz musician Manuel Luz for a unique conversation on art and faith.

In this session, Dave Blakeslee, long time pastor and professional potter, shares about our true destiny; how we were created to carry God’s inspiration.

In this two-part session, J. Scott McElroy begins (at 04:30) by sharing the exciting the elements of a Creative Church. It’s a wide-ranging talk that brings his Creative Church Handbook to life. Then Manuel Luz picks up (at 56:40) with “Jazz Fusion: Rules of Engagement for Artist Communities”.

Jessie Nilo introduces the Night of Worship, then (beginning at 09:00) Jason Leith and Bryn Gillette, both extraordinary artists and arts leaders, share stories of engaging their congregations and the culture with their art.

Bryn Gillette is an art teacher and visual artist who has been mentored by Makoto Fujimura and Bruce Herman.